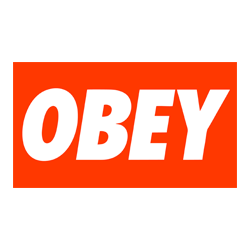 OBEY Clothing was founded on the art, design and ideals of Shepard Fairey. What started for Fairey with an absurd sticker he created in 1989 while studying at the Rhode Island School of Design has since evolved into a worldwide street art campaign, as well as an acclaimed body of fine art.

The OBEY campaign is rooted in the Do It Yourself counterculture of punk rock and skateboarding, but it has also taken cues from popular culture, commercial marketing and political messaging. Fairey steeps his ideology and iconography in self-empowerment. With biting sarcasm verging on reverse psychology, he goads viewers, using the imperative “obey,” to take heed of the propagandists out to bend the world to their agendas.

OBEY Clothing was formed in 2001 as an extension of Shepard’s range of work. Aligned with his populist views, clothing became another canvas to spread his art and message to the people. The clothing is heavily inspired by classic military design, work wear basics, as well as the elements and cultural movements Shepard has based his art career on. Through designers Mike Ternosky and Grace Lee, Shepard works to create designs that represent his influences, ideals and philosophy.